A Legion of Leeks

I recently tried a new recipe using leeks (a vegetable I have not cooked with before), and like it so much that I found another one to use the leftover leeks (my tiny little burg's grocery store only sells leeks in bundles of 3). So, here's some good recipes (one for dinner and one for breakfast) that showcase leeks: 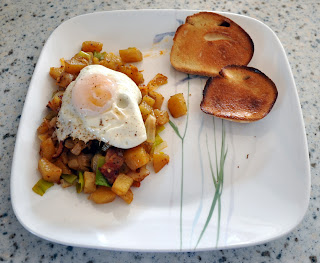 2 leeks
4 slices of thick sliced bacon, diced
1 onion, diced
4 to 6 potatoes*
Salt and pepper to taste
A pinch of smoked paprika
A pinch of celery salt
* This is a great way to use leftover potatoes from a pot roast; just dice them up and toss them in!


This hash is excellent when served with fried or poached eggs on top and English Muffin Bread toast on the side.
Posted by DKBB at 12:32 PM