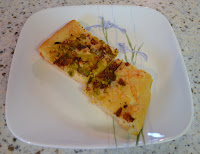 * You can substitute real bacon bits for the chopped bacon as long as you have bacon fat to cook the leeks in.